Yuvraj Singh and Harbhajan Singh’s camaraderie on and off the field is often regarded as a golden standard of a relationship among professional cricketers. However, the duo has not shared the dressing room for quite some time now and now that Yuvraj Singh has retired, the prospect is effectively done and dusted. It hasn’t stopped Yuvraj and Harbhajan from pulling each other’s leg for their social posts, which serves as a great source of entertainment for their fans. On Thursday, when Yuvraj Singh shared a split image of his present self and as a young kid on Instagram, Harbhajan couldn’t keep himself from posting a funny comment.

Yuvraj, in his post, compared the two pictures and wrote that despite so many years the only thing that has changed is his beard. However, Harbhajan was not buying his argument and posted a cheeky comment.

“Well nothing much seems to have changed except the beard! Same innocence on the face and decent looks too. What do you feel?” Yuvraj captioned his post.

To which Harbhajan commented: “R u sure paji just the beard??”. 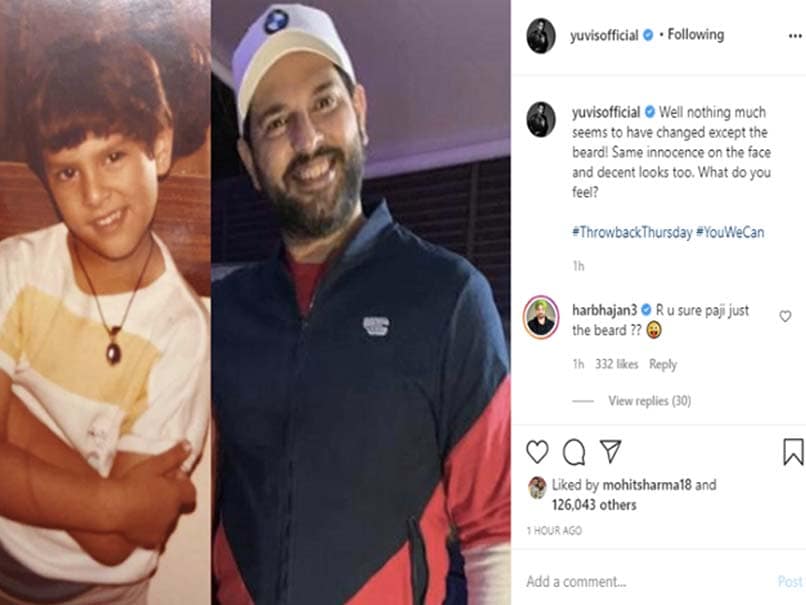 Harbhajan had posted a similar split image of himself from two different eras — 1996-97 and 2019-20. “Take time to be thankful for everything that you have.. you can always have more, but you could also have less,” the Chennai Super Kings off-spinner captioned his post.

Harbhajan will be next seen in action playing for three-time champion Chennai Super Kings (CSK) in the 13th edition of the Indian Premier League (IPL), which is scheduled to start on September 19 in the United Arab Emirates (UAE).

IND vs ENG: Wasim Jaffer Is Asked For Meme On Pitch Row, He Comes Up With A Gem

IND vs ENG: Enjoyed Joe Root’s Dismissal As I Set Him Up, Says Mohammed Siraj