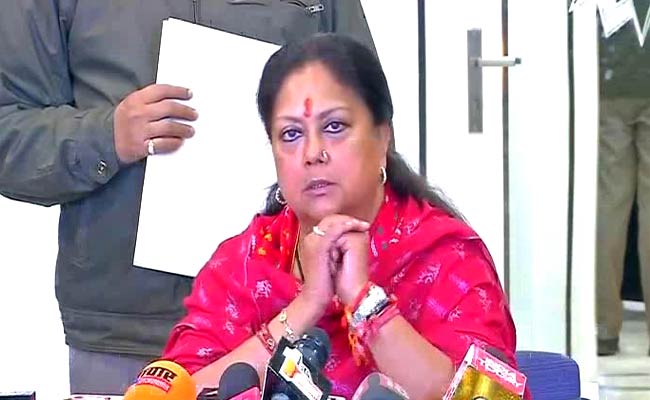 The “silence” of senior BJP leader Vasundhara Raje Scindia on the political developments in Rajasthan can be a “strategy”, her party colleague and Union Minister Gajendra Shekhawat said on Sunday.

In an interview to PTI, Mr Shekhawat, who has been accused by Rajasthan Chief Minister Ashok Gehlot of trying to topple his government, also alleged that it was the Congress leader who had orchestrated the political “drama” in the state to target his rivals in the party and outside.

“He has been unable to digest that I defeated his son in Lok Sabha elections and is trying everything against me, by hook or by crook to avenge his defeat,” said Mr Shekhawat, who represents Jodhpur and had defeated Vaibhav Gehlot in the 2019 Lok Sabha election by more than 2.74 lakh votes.

Underlining that the BJP has nothing to do with the political crisis in Rajasthan, Mr Shekhawat maintained that it is the fallout of the infighting in the Congress involving Mr Gehlot and his former deputy Sachin Pilot.

“With this ongoing drama in the state, he (Gehlot) wants to eliminate Sachin (Pilot) and others from the party. He is blaming the BJP for this entire crisis and trying to tarnish the image of its leadership,” Mr Shekhawat said.

When asked about former chief minister Vasundhara Raje Scindia being largely silent on the issue, Mr Shekhawat said, “Well Vasundharaji’s silence can be a strategy and sometimes silence is louder than words.”

He, however, refused to elaborate.

When the Gehlot-Pilot feud spilled into the open, Ms Raje, a two-time chief minister, maintained a conspicuous silence though all other BJP leaders from the state were speaking on the issue and attacking the Congress.

A week later, she had posted a couple of tweets saying some people were trying to create confusion on the political developments in the state and insisted that she stands with her party and its ideology.

Her remarks came in the backdrop of Nagaur MP and Rashtriya Loktantrik Party convener Hanuman Beniwal accusing her of having an “internal alliance” with Mr Gehlot.

Mr Beniwal has been a critic of Ms Raje and had left the BJP in 2018 before assembly elections.

Differences between Raje and the party’s central leadership over the appointment of BJP’s Rajasthan unit chief in 2018 had delayed it for more than two months and eventually a consensus was reached on the name of Madan Lal Saini.

After the party lost the last Rajasthan assembly elections, Ms Raje was appointed as vice-president of the BJP.

Mr Shekhawat alleged that the chief minister shifting the MLAs to Jaisalmer shows that he does not trust them and the government lacks majority.

Asserting that there was a “vertical spilt” in the state government since the Congress came to power in the state in 2018, he said, “When the CM himself had said that he and Sachin were not talking to each other for more than a year and half, then it tells you the entire story.”

“With MLAs being shifted to Jaisalmer in a fortress, it clearly shows that the chief minister doesn’t trust his own MLAs and rather than tackling the coronavirus crisis, he is battling to keep his house in order. It also shows that the government lacks majority,” he said.

Unfortunately, innocent people of the state are paying the price for the infighting in the Congress, the BJP leader said.

Gajendra Shekhawat, a second-time MP from Jodhpur, is the Union Jal Shakti Minister.

He started his career as a student leader from Jodhpur University in 1992 and thereafter was associated with various RSS-backed organisations. He closely worked with former chief minister and late BJP leader Bhairon Singh Shekhawat in the 1993 assembly polls in Rajasthan.

He came into prominence for his work as general secretary of Seema Jan Kalyan Samiti, a Sangh-backed outfit working in border areas of Rajasthan.