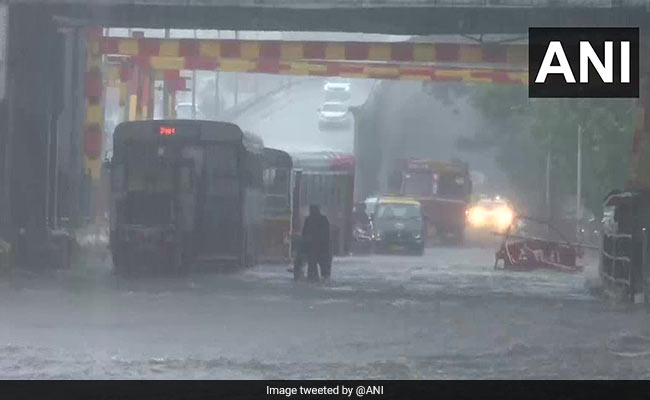 Mumbai has been witnessing heavy rains since Tuesday night

Twelve people were killed in rain and flood-related incidents across the country, while the IMD on Wednesday issued red alerts for Gujarat and for coastal Maharashtra following heavy rains in Mumbai and adjoining areas.

While seven people died in Assam floods, four, including a pregnant woman, died in a house collapse in Uttarakhand. A farmer was killed after being struck by lightning in Maharashtra.

According to an official bulletin, 36 lakh people have been affected in 26 districts of Assam due to floods. Of the seven dead, three died in Morigaon district, two in Barpeta and one each in Sonitpur and Golaghat districts.

The Assam State Disaster Management Authority (ASDMA) said that so far, 92 people have died in in flood-related incidents. Sixty-six people died in floods and 26 were killed in landslides.

In the wake of the heavy downpour in Mumbai and coastal Maharashtra, the India Meteorological Department (IMD) upgraded the warning status from orange to red. The city has been witnessing heavy rains since Tuesday night, resulting in water logging in many areas.

Red alert has been issued for Mumbai, R K Jenamani, a scientist with the National Weather Forecasting Centre, said.

A bulletin said scattered “heavy to very heavy rainfall” with isolated “extremely heavy falls” are very likely to occur over Mumbai city, Thane, Raigad and Ratnagiri districts during the next 18 hours.

It added that due to the heavy rains, inundation of low-lying areas is expected. The rains could also lead to disruption in electricity and water supply, local traffic and road transport.

Meanwhile in Maharashtra’s Nagpur district, a farmer died after being struck by lightning. He had gone to the fields to bring his cows home when lightning struck him on Tuesday evening.

The IMD has forecast ”heavy to very heavy rain” in Gujarat on Thursday and issued a red alert for it.

The weather department has also issued an orange colour alert for Goa, coastal and central Maharashtra for the same day.

According to IMD data, the Safdarjung Observatory in Delhi, which provides representative figures for the city, has recorded 44 mm rainfall in July so far, which is around 50 per cent less than the normal of 88.3 mm.

Palam and Lodhi Road weather stations in the national capital have also recorded 24 and 43 percent less rains in July.

Mahesh Palawat of Skymet Weather, a private forecasting agency, said Delhi received only isolated light rains over the last few days as the monsoon trough had shifted towards the foothills of the Himalayas.

At present, the axis of monsoon lies south of Delhi. It will start moving towards the north on July 17 and cause rains in northwest India, including Punjab, Haryana and Delhi.

A fresh spell of “light to moderate” rains is expected from July 17 to July 20 in the national capital, Kuldeep Srivastava, the head of the regional forecasting center of the IMD, said.

“We expect to record around 20 mm rainfall in Delhi during this period which will reduce the deficiency to a certain extent,” he said, adding the mercury is expected to dip to the lower 30s.

On Wednesday, the city continued to reel under hot and humid weather as rain gave it a miss.

The Safdarjung Observatory recorded a maximum of 37 degrees Celsius, two notches more than normal. Humidity levels shot up to 81 per cent.

The national capital has recorded a 50 per cent rainfall deficiency in July so far, but “moderate” showers on the weekend are expected to make up for the deficit, the weatherman said.

In Uttarakhand’s Dehradun district, four members of a family, including a pregnant woman and an eight-year-old girl, were killed and two injured in their sleep when their house in Chukkhuwala area collapsed in the early hours of Wednesday, police said.

The house collapsed when a buttress caved in following heavy rain at around 1.30 am. While three family members died on the spot, another woman succumbed at the hospital, they said.

In Uttar Pradesh, light to moderate rains along with thundershowers occurred at a few places in the state. Thunderstorm accompanied with lightening was witnessed at isolated places over the state.

Weatherman forecast rains along with thundershower at many places over the state on July 16 and 17, it said.

Chandigarh, the common capital of the two states received heavy showers on Tuesday night and recorded a maximum temperature of 33.6 degrees Celsius on Wednesday.

According to the MeT department, rain or thundershowers are likely at a few places in both states over the next two days.